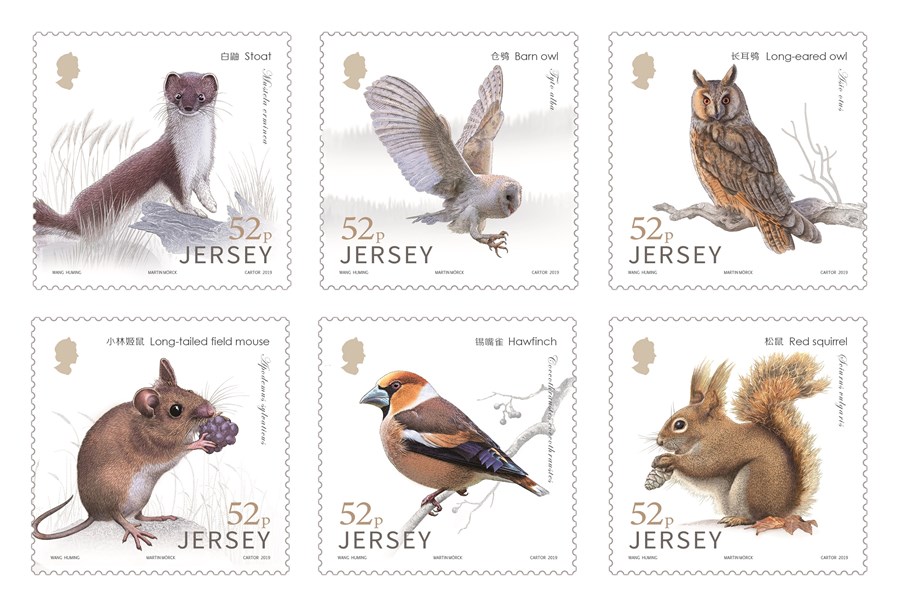 Species of woodland wildlife that have been recorded in both Jersey and China will feature on a set of six stamps to be issued by Jersey Post on 2 September 2019. The stamps form the fifth and final instalment in a series looking at Jersey’s natural links with China and Norwegian stamp artist, Martin Mörck, was once again commissioned to collaborate with Chinese designer, Wang Huming, to produce the illustrations for the set.

In recent years, China and Jersey have shared many exchanges between schoolchildren, businessmen and women as well as government representatives and dignitaries. The purposes of the visits are wide-reaching and can involve exploring each other’s cultures and ways of life.

Despite the huge distance between China and the island of Jersey, there are many similarities in the countries’ natural environments and several species of woodland wildlife have been recorded in both regions. The six stamps in this set feature the Stoat, Barn Owl, Long-eared Owl, Long-tailed Field Mouse, Hawfinch, and Red Squirrel.

Norwegian artist and stamp engraver Martin Mörck has produced over 800 stamps for 20 postal administrations and during his time in China, was honoured to be made a guest professor in copper engraving at Tsing Hua University of Fine Arts in Beijing.

Wang Huming is Art Director of the Postage Stamp Printing Bureau of China Post. He is a member of the Chinese Artists Association and committee member of the Graphic Design and Chinese Photographers Associations. Stamp collectors in China have continuously voted Wang Huming their most loved stamp designer and he has won numerous awards and prizes as well as being honoured by the State Council of China for his outstanding work in the philatelic industry.

Jersey Post’s Woodland Wildlife stamps will be available to buy from all branches of Jersey Post from 2 September 2019. Philatelic stamp products such as Souvenir Miniature Sheets, Souvenir Sheetlets, First Day Covers and Presentation Packs will be available from the Jersey post offices at Broad Street, St Helier and Rue Des Pres, St Saviour on issue day and can be ordered now at www.jerseystamps.com or by telephoning the Jersey Philatelic Bureau on: 00 44 (0)1534 616717.