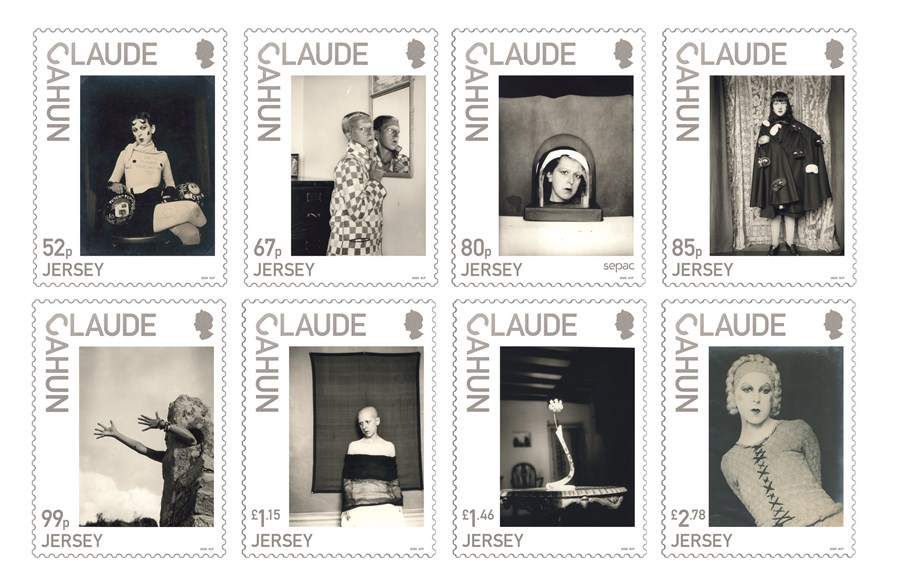 Photographs by French Surrealist, Claude Cahun, are to feature on a set of eight stamps to be released by Jersey Post on 12 February 2020. Considered ground-breaking and ahead of its time, Cahun’s photography focuses on themes of identity, gender and the subconscious mind.

Claude Cahun lived in Jersey with her partner, Marcel Moore, from 1937 until her death in 1954. Best known for Cahun’s androgynous self-portraits, the pair are famous for creating some of the most startlingly original and enigmatic photographic images of the twentieth century.

The Jersey Heritage Trust collection represents the largest repository of Cahun and Moore’s work and has been described by Jersey Heritage as one of the Island’s great cultural assets. “Since 1995, the collection has been featured in over 50 exhibitions around the world,” explains Val Nelson, Senior Registrar at Jersey Heritage. “Cahun has attracted a cult following among art historians and critics and we’re thrilled and excited to see a selection of her work being the subject of a set of stamps here in Jersey.”

Born in Nantes in France in 1894, Cahun moved to Jersey in 1937 with her partner, Marcel Moore. The pair were imprisoned for activities during the Occupation of the Island and sentenced to death for creating and disseminating anti-Nazi poetry, artwork and writings. Whilst the executions were never carried out, Cahun suffered ill health for the rest of her life as a result of her imprisonment. Cahun died in Jersey in 1954 and is buried in St Brelade’s Church in the west of the Island. A commemorative plaque can be found on the side of La Rocquaise, the house in which she lived.

Jersey Post’s Claude Cahun stamps will be available to buy from all branches of Jersey Post from 12 February 2020. Philatelic stamp products such as First Day Covers and Presentation Packs will be available from the Jersey post offices at Broad Street, St Helier and Rue Des Pres, St Saviour on issue day and can be ordered now at www.jerseystamps.com or by telephoning the Jersey Philatelic Bureau on: 00 44 (0)1534 616717.