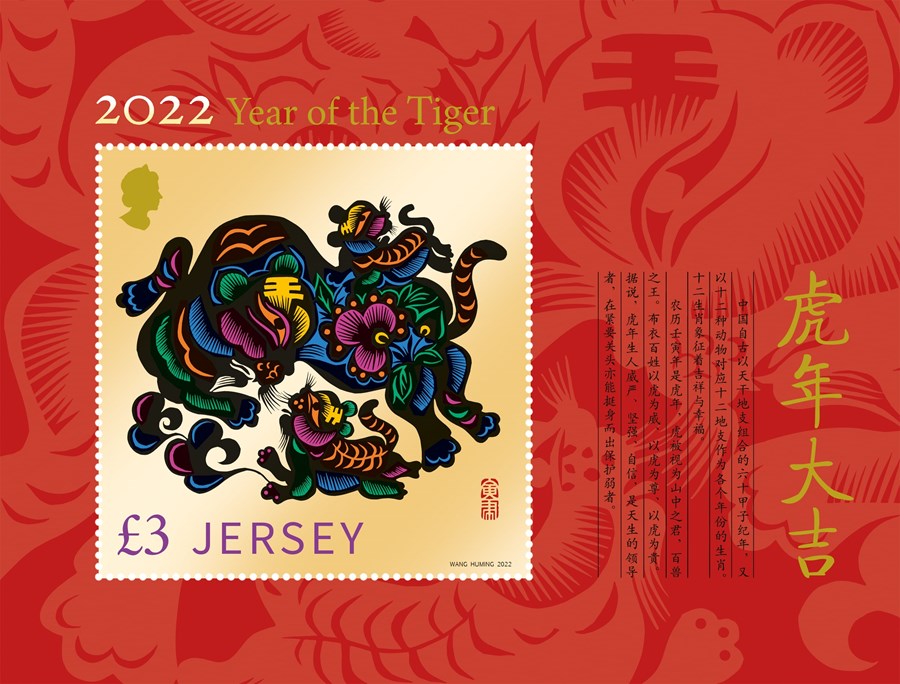 Also known as the Spring Festival, the Lunar New Year is the most important celebration in the Chinese calendar. It is celebrated by Chinese and ethnic communities worldwide and is a time when families come together. The Chinese animal zodiac is a repeating cycle of twelve years; each of the twelve years is represented by an animal and 2022 is the Year of the Tiger.

In Chinese culture, tigers rule the mountains as the king of all animals and embody courage and strength. Tigers have prestige, are honourable and respected and people born in the year of Renyin tiger are born leaders, full of strength and confidence.

The stamps have been designed by Wang Huming in Beijing, China. The Deputy Chief Designer of the Postage Stamp Printing Bureau of China Post, Wang Huming has created the designs for each of the issues in Jersey Post’s Lunar New Year series and has been continuously elected as the most loved stamp designer by Chinese collectors in recent years.

The stamp design depicts the Renyin tiger in gold metallic ink, symbolising courage and strength. With its head raised upwards, the tiger represents a leader full of power and confidence who protects the weak and is respected. The pattern on the head of the tiger is a Chinese word meaning ‘the king’. In the background of the stamp on the upper right corner is the Chinese character for ‘tiger’ in the style of calligraphy launched by the First Emperor of Qin around 222 BC. The Chinese seal which appears on the left of the illustration denotes renyin, Year of the Tiger.

The miniature sheet illustrates two tiger cubs playing with their mother. In Chinese culture, this embodiment represents a guardian of children and babies, a protector. In addition, the tiger is often known as the king of the mountains and is a powerful creature endowed with the ability to ward off evil spirits. The tiger’s head has patterns representing the Chinese word meaning ‘the king’. The border of the miniature sheet has a narrative in Chinese characters explaining some of the background of the Chinese zodiac followed by information regarding the Year of the Tiger.

Jersey Post’s Year of the tiger stamps will be available to buy from all branches of Jersey Post from 4 January 2022. Philatelic stamp products such as Miniature Sheets, First Day Covers and Presentation Packs will be available from the Jersey post offices at Broad Street, St Helier and Rue Des Pres, St Saviour on issue day and can be ordered now at www.jerseystamps.com or by telephoning the Jersey Philatelic Bureau on: 00 44 (0)1534 616717.