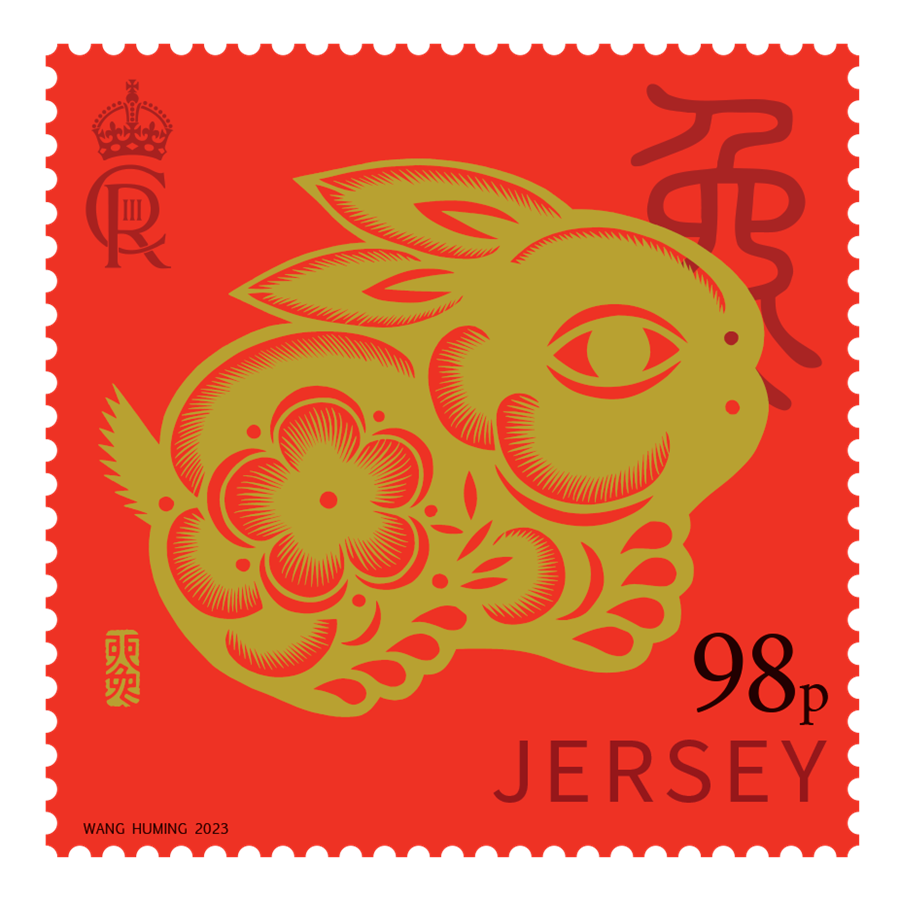 The first Jersey stamps to feature the royal cypher of His Majesty King Charles III are to be issued by Jersey Post on 5th January 2023. The single stamp and miniature sheet, which celebrate the Year of the Rabbit, will bear the new cypher in the top left corner. The cypher is the Sovereign’s monogram, consisting of the initials of the monarch’s name, Charles, and title, Rex – Latin for King, alongside a representation of the Crown.

Also known as the Spring Festival, the Lunar New Year is the most important celebration in the Chinese calendar. It is celebrated by Chinese and ethnic communities around the world and is a time when families come together. The Chinese animal zodiac is a repeating cycle of twelve years; each of the twelve years is represented by an animal and 2023 is the Year of the Rabbit.

The stamp designer, Wang Huming, is the Deputy Chief Designer of the Postage Stamp Printing Bureau of China Post and has created the designs for each of the issues in Jersey Post’s Lunar New Year series. The designs are based on a Chinese style of painting and paper cutting.

The image of the rabbit on the 98p stamp symbolises health and longevity. In Chinese culture, there is a well-known tale entitled The Legend of the Jade Rabbit. According to legend, the rabbit lives in a moon palace with Lady Chang’e, who has taken an immortality pill and flown from Earth to the moon. The rabbit keeps Lady Chang’e company and grinds magical immortality medicine and, for this reason, in Chinese culture it is often said that the rabbit brings health and longevity.

The miniature sheet depicts a rabbit holding a Chinese cabbage with a cricket on it. Cricket fighting is a tradition in China that is thought to date back over a thousand years and, in Chinese culture, the cricket is associated with happy and relaxing times. Chinese cabbage is a very popular vegetable in China. Historically, during Chinese winters, this was one of the few vegetables available and people in China have a particular appreciation for the cabbage. Furthermore, in Chinese, the pronunciation of cabbage is Baicai, which is the same as the pronunciation of 100 fortunes.

The stamp and the miniature sheet both feature a gold metallic ink and varnish.

Jersey Post’s Year of the Rabbit stamps will be available to buy from all branches of Jersey Post from 5 January 2023. Philatelic stamp products such as miniature sheets, first day covers and presentation packs will be available from the Jersey post offices at Broad Street, St Helier and Rue Des Pres, St Saviour on issue day and can be ordered now at www.jerseystamps.com. Alternatively, you can email the Jersey Philatelic Bureau at stamps@jerseypost.com or telephone us on: +44(0) 1534 616717.